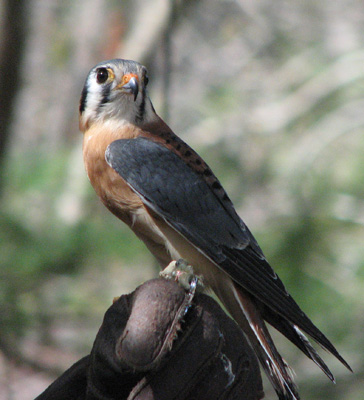 What does the American Kestrel look like?
The Kestrel is the smallest, most common falcon in North America. It has a small bullet-like head marked with a black and white pattern and moustache-like marks on the sides. The Kestrel’s wings are slim and pointed colored blue-gray on males and brown on females. The back of the bird is a reddish-brown color.

Where are American Kestrels found, and what is their habitat?
American Kestrels are found throughout the United States and into Canada. Some northern populations migrate south for the wintertime. This bird is often seen along the edges of fields and roadsides. It prefers semi-open country, such as open fields that border woodlands.

How does the American Kestrel hunt and what is its prey?
The Kestrel has more than one hunting method. One is to strike a perched bird by direct high-speed approach, then if this fails to pursue the bird in full flight. Another method is to “hover” above prey by facing the wind and rapidly beating its wings. When it is ready to grab its prey the bird folds its wings and swoops down to snatch it up in its talons. It will also spend time perched high above fields or roadways watching for prey. Kestrels hunt mostly mice and large insects, but will also take bats, small snakes, frogs, earthworms and birds. Kestrels are preyed upon by larger raptors including owls, hawks, and other falcons.

How does the American Kestrel raise its young?
Kestrels nest in holes in trees made by flickers, and sometimes in man-made nest boxes. The female incubates her 4-6 eggs for 29-30 days, while the male brings her food. The young birds take their first flight 30-31 days after hatching, but remain dependant on their parents for food until they learn to hunt on their own.

What special adaptations do they have?
Kestrels have excellent vision which they depend on to be an efficient diurnal, or daytime hunter. Like all raptors the Kestrel uses its sharp talons to capture and kill prey. Additionally, it has a curved, pointed beak which is used to tear apart prey into smaller pieces. Although small, this bird exhibits noisy and aggressive behavior towards other raptors to protect its territory.