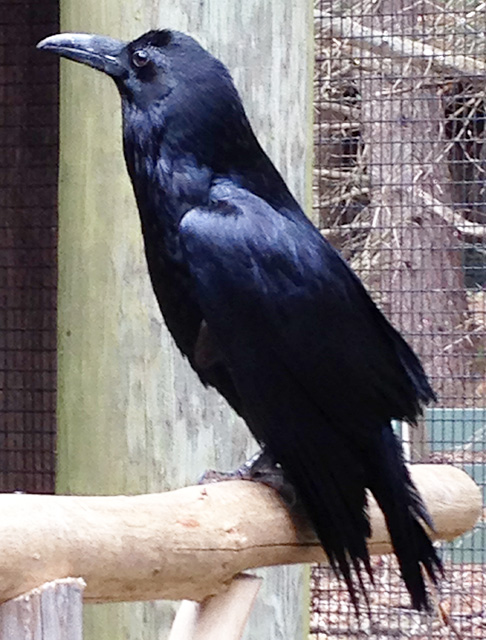 How do you identify a Common Raven?
Ravens are the largest passerine (perching) bird. A large member of the crow family with shiny blackish blue plumage, a long powerful beak, stiff throat feathers creating a shaggy appearance, and a long wedge shaped tail. Black legs and feet, dark brown eyes. The common call of the Raven is a deep or hoarse croak. Part of the scientific name Corax comes from the Greek word meaning “croaker.” Additional calls can be high pitched bell-like twangs.

Where are Ravens found?
Ravens are found in mountains, plains, deserts, seacoasts, coniferous, mixed and deciduous forests, tropics, and tundra. Ranging throughout Alaska and Canada (excluding prairies), in Western United States, and along Appalachians.

What do Ravens eat?
Ravens primarily eat carrion, small vertebrates, including fish and mammals, bird eggs and nestlings, insects and other invertebrates, garbage, seeds, fruit, grains, acorns, and nuts. They will commonly cache food for a few days by burying it. Their food is subject to taste tests where it may be crushed and palpated in the bill for many seconds before swallowing or rejecting the food.

What are some adaptations of Ravens?
Ravens are known for their intelligence and curiousity. Learning is extremely important to Ravens and young birds often learn and gain experience by following their parents. Ravens use their intelligence to obtain food. They cache their food and may steal food from other animal caches using visual cues on the ground to locate the stored food. They remember a cache for a few days but seem to be unable to remember a cache location longer than three weeks. They have been known to break open mollusk shells by dropping them on the rocks below. They will strike prey or food with their strong beak, and also use their beak to dig out prey or food from the soil or snow. Ravens use their voice, body posture, and their patterns of erecting feathers to communicate with one another. Occasionally they hunt together in groups. Aerial displays, acrobatics, and spectacular dives are thought to be play behavior. Ravens have an acute sense of sight and hearing. They can detect the Earth’s magnetic field, polarized light, and ultrasound.

How do Ravens raise their young?
The breeding season of the Raven is March to May. The nest is a large structure built from sticks and twigs lined with grasses, mosses, hair, and sometimes seaweed. The nest is usually built in a tree or on a cliff ledge. The Raven can lay anywhere from 3 to 8 eggs, but usually 4 to 6. The eggs are about two inches long, are greenish gray or light green with dark or dull brown, or green blotches. The eggs are incubated by the female alone; the male will feed the female while she is incubating. The incubation period is 20 to 21 days. Chicks hatch from the eggs pink, blind, and naked weighing about an ounce, although they gain weight quickly. Both parents take part in feeding the chicks. The young birds will take their first flight at 5 to 6 weeks. The Raven will only have one brood per year. They are capable of breeding around three years old. The lifespan of the Raven in the wild can be up to 13 years, and 29 years in captivity. Ravens are highly social birds with pairs most likely remaining bonded throughout the year. They roost communally during the winter, occasionally in marsh areas. Young ravens, called “floaters,” may move over large distances and socialize in large groups forming strong partnerships and working cooperatively together to kill prey or raid a nest.